Positive start in tricky conditions for Jack Butel at Thruxton 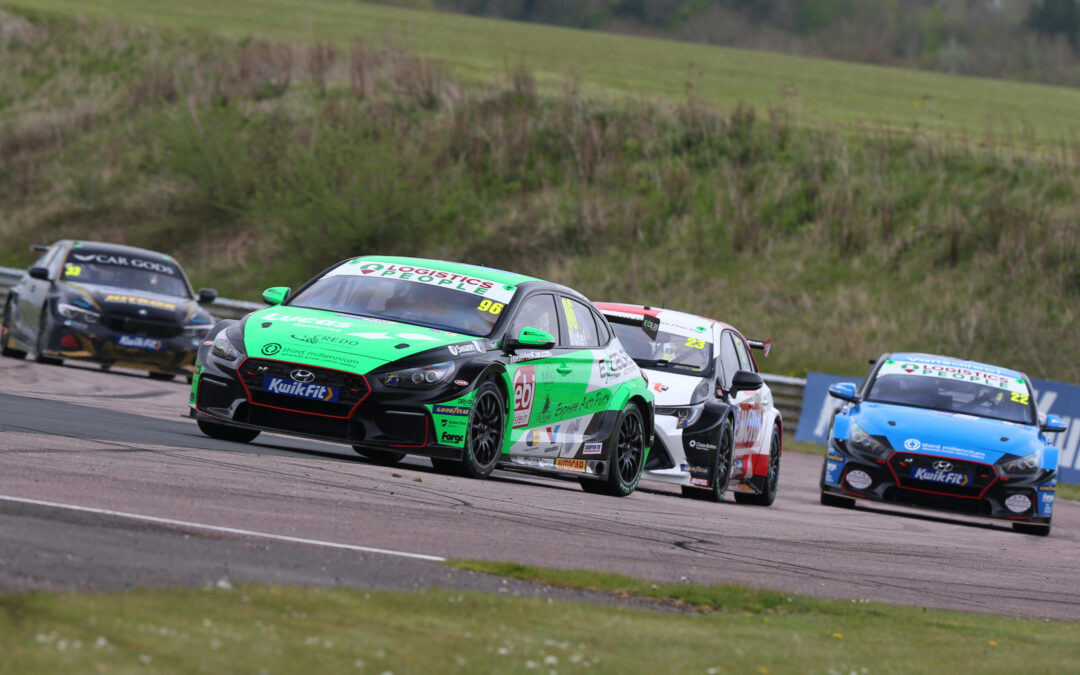 The season opener marked Jack’s debut with the EXCELR8 with TradePriceCars.com team after a move to the Hyundai outfit over the winter, with the 25-year-old looking to build on an encouraging pre-season testing programme with his new team.

Keen to try and make as much progress as possible across the weekend with the ultimate goal of fighting towards the points, Jack’s task was made all the more difficult on Saturday when wet weather conditions greeted the drivers for free practice.

Given that he was sampling Thruxton – the fastest circuit on the calendar – for the first time with the Hyundai, Jack stayed out of trouble in the two 40 minute sessions and headed into qualifying looking to try and push towards the top 20.

As it was, his switch onto slick tyres as the circuit dried came a few minutes too late and restricted him to 28th place on the grid, but with the knowledge that there was more time to come on race day.

That proved to be true in the opening race of the weekend, with Jack coming through the opening lap unscathed and having already worked his way up to 23rd.

Although he would then lose a few places after an early safety car period, Jack kept his focus on the job at hand and got quicker as the race wore on, making up places through the final laps to eventually cross the line in 21st place.

Avoiding an incident at the start of race two that led to the action being halted, Jack wasted little time in getting into the top 20 when racing resumed. Faced with understeer as the race wore on, Jack was still able to post his fastest lap in the closing stages and was rewarded with 19th place after holding off the Toyota of Sam Smelt.

The rain returned prior to the start of race three, with Jack amongst the drivers to make the switch to wet tyres rather than gamble on sticking with slicks. Having lost places in the melee of the opening lap, Jack got his head down and was soon picking off the drivers ahead as he worked his way back towards the top 20.

Whilst the circuit would start to dry and conditions began to favour those drivers who had gone with slick rubber, the rain returned in the closing laps and Jack took full advantage to get back up to 19th by the finish and secure another top 20 result from the weekend.

Although unable to break into the overall points, a triple score amongst the Independent class drivers leave Jack 13th in the Independents Trophy, whilst he holds fourth in the Jack Sears Trophy; the award only open to those drivers without an overall BTCC podium to their name.

“Considering the weather conditions we’ve faced, I think it’s been a good weekend to start the season, and it’s really encouraging to have picked up a pair of top 20 finishes on my first weekend in the Hyundai,” he reflected.

“Saturday was tough with the weather, and in qualifying we just made the call to switch to slick tyres a little bit too late. There were seven minutes or so left when I swapped from the wets and there just wasn’t enough time to get heat into the tyres, so we didn’t really qualify where we should have done.

‘In race one however in the dry, I felt the pace was really good and I was quite consistent which meant I could make up places and start to work forwards. We made a few changes to the set-up for race two but ended up with understeer that meant the car was a bit of handful, although I still managed to improve my result.

“With five minutes to go to race three it was a tough call on which way to go with the tyres but I think we made the right decision to stick with wets. I just have to hold my hands up as I pushed a bit too hard too early and cooked the tyres, which meant they weren’t at their best when the conditions worsened towards the end.

“It’s all part of the learning process but I’m pleased with the way the weekend has gone, and the team is also happy which is important. I feel confident going to Snetterton next because I’ve already been able to test there, and although we have work to do, the pace was encouraging and we know we have a solid base to start from.

“Huge thank you to all the sponsors who are supporting me this season, and after this weekend, I feel even more confident of a strong year on track.”