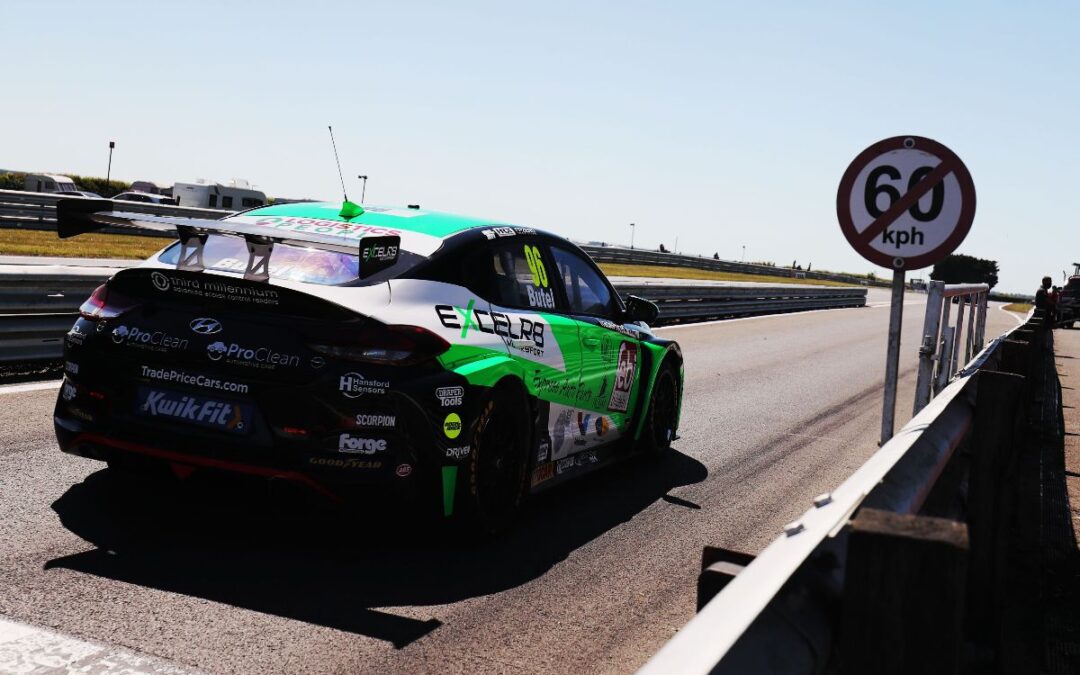 Jersey racer Jack Butel boosted his bid for the Jack Sears Trophy title with another solid weekend on track as the Kwik Fit British Touring Car Championship headed for Snetterton for the second round of the season.

Jack made the long trip to the Norfolk circuit on the back of a solid debut with his new EXCELR8 with TradePriceCars.com team at Thruxton, where the 25-year-old picked up two top 20 finishes at the wheel of his Hyundai i30 Fastback N.

Snetterton would provide a different challenge to the season opener, with the circuit bathed in sunshine throughout and drivers forced to contend with high temperatures across both qualifying and the three races, which were run with fans trackside for the first time in more than 18 months.

After a solid run in the two free practice sessions, Jack headed into qualifying in confident mood and he secured 25th place on the grid for the opening race of the weekend – lapping more than two seconds quicker than he had done in the corresponding session last season.

Electing to run the soft compound Goodyear tyre in the opening race – with drivers having to use the option tyre once on race day – Jack made up a place when the race kicked off and would set his fastest ever BTCC race lap at the longest circuit on the calendar in the early stages.

However, he would then struggle as the race wore on and the performance of the soft tyre started to drop away, slipping back down to 27th before fighting his way back ahead of the Cupra of Glynn Geddie before the finish.

Running on the slower but more durable medium compound tyre in race two, Jack was able to stay out of trouble on the opening lap despite incidents ahead on track and made up a spot into the top 25.

Settling into a consistent rhythm, Jack was able to work his way forwards as the race developed to cross the line in 22nd place having made up two spots on the final lap.

Another solid drive would then follow in race three, with Jack fighting his way into the top 20 in the opening laps and keeping the BMW of multiple race winner Tom Chilton at bay.

Although Chilton would eventually manage to get ahead of the Hyundai, Jack was able to comfortably break clear of the pack behind as his weekend ended with a 21st place finish.

Jack ends the weekend sitting 16th in the Independents’ Trophy but has moved up a place to third in the Jack Sears Trophy going into the next meeting of the campaign at Brands Hatch in two weeks time.

“We have been able to learn a lot again this weekend, and I think I have come on leaps and bounds with the car since Thruxton,” he said. “I’m really starting to discover more about what you need to do to make the Hyundai work and to get the most out of it, and I think that is reflected in the lap times as I was noticeably quicker than I was last year in the Mercedes in both qualifying and the races.

“Like at Thruxton, the key thing is that the team is happy with how I have performed across the three races because if they are happy then I know I’m doing a good job. This was the first weekend where we had to run the option tyre and to be honest, we struggled a little bit to get the most out of them in the opening race, but we came back well in the other two and were close to another top 20 in race three.

“I think this weekend is one that has shown how high the level of competition is in the BTCC this season, and I think it’s one of the most competitive seasons there has been for a long time. The times were so close throughout the field that making up places was difficult, and I think we had the pace to have been able to fight for points if we’d had track position.

“Of course it would have been nice to get points on the board this weekend but I’m looking forward to Brands Hatch and hopefully we can be in the mix for the top 15 when we go there in a few weeks time.”