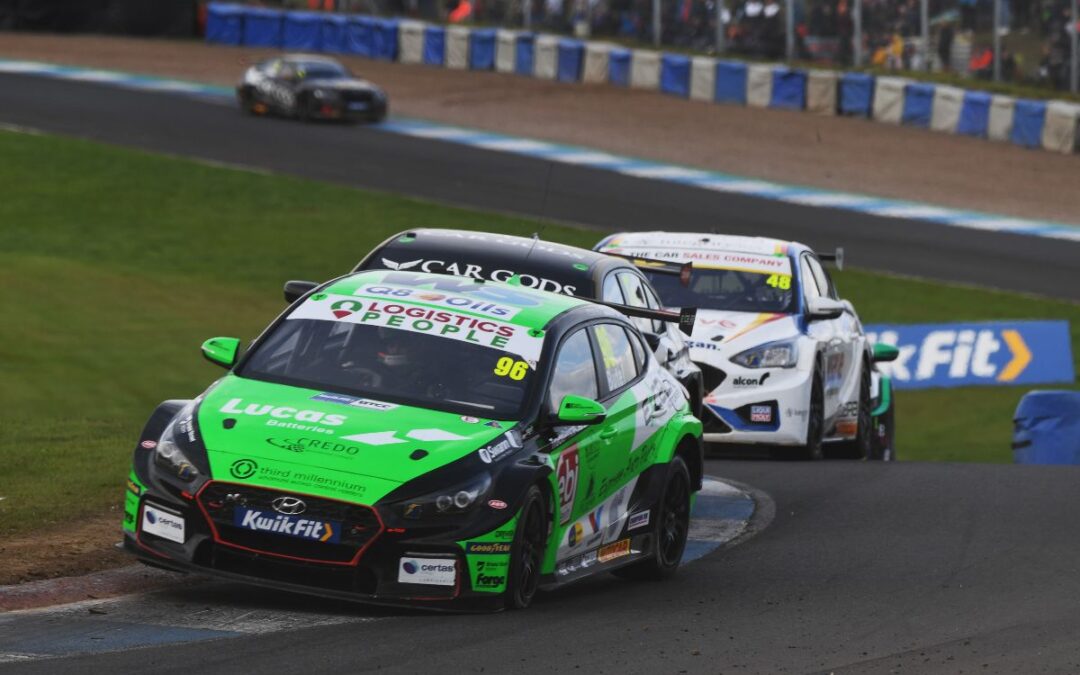 Jack made the long trip to Scotland looking to bounce back from a bruising encounter at Oulton Park two weeks earlier, which had ended with his EXCELR8 with TradePriceCars.com Hyundai i30 Fastback N looking far from pristine after he was caught up in an incident in the final race of the weekend.

Two busy free practice sessions on Saturday helped Jack to prepare for the all-important qualifying session, but it would prove to be a tricky affair with Jack ending up 27th on the grid despite his best lap being little more than a second away from pole position.

Electing to run the slower medium compound tyre in the first race, Jack lined up on the grid for the start unsure of what to expect, but any worries about whether he would be able to make much progress proved to be unfounded.

Instead, strong race pace from the Hyundai allowed Jack to work his way forwards after an early caution period to cross the line in 20th place, having made up an impressive seven spots.

Race two could have ended in disaster when team-mate Chris Smiley stalled at the start, leading the field behind – Jack included – to scatter in avoidance. Having managed to stay out of trouble, Jack ended the opening lap in 16th spot and just outside the points, but would then fight his way ahead of the Ford Focus of Sam Osborne to get into 15th.

A spin for Rory Butcher then moved Jack up into 14th and even though a safety car closed the field up behind, he charged clear of the chasing pack on the restart to secure a first points finish of the year and match his best result in the series to date.

Race three provided the chance to fight for further points and Jack made up two places at the start to run in twelfth before he dipped a wheel off track at the chicane, which allowed a number of his rivals to sneak ahead.

Although shuffled back down to 18th, Jack once again fought his way forwards and would take the flag less than a second away from the points in 16th spot.

As well as putting an overall points finish on the board, three solid results amongst the Jack Sears Trophy entrants has seen Jack close the gap on the top three ahead of the next round at Thruxton in two weeks time.

“It’s been an absolutely mega weekend for me in the end, and not what I expected after qualifying,” he said. “To be perfectly honest, my performance there was absolutely useless, and I went into race day thinking we had no chance of fighting for points from where we were starting. To then come away from the weekend having matched my best result in the BTCC is absolutely fantastic and I’m so happy with how things have gone.

“The first race proved to be massively important and to get up into 20th on the medium tyre really set me up for the two races that followed. It was a bit chaotic at the start of race two, but once we got through the opening lap I felt comfortable in the pack and the pace in the car was really good, particularly at the end when I could have come under attack after the safety car. To bring home a 14th place finish is great as we’ve worked so hard to get those points on the board.

“In race three I got a great start to move up into P12, but then I hit the kerb a bit too hard at the chicane and a load of cars got ahead of me, but that is racing and it happens. This weekend has shown that we have strong race pace and it was only down to a silly mistake on my part in that final race that we ended up just outside the points rather than taking home two top 15 finishes.

“This weekend has been a massive boost to the confidence, and I can’t wait to get back in the car at Thruxton.”