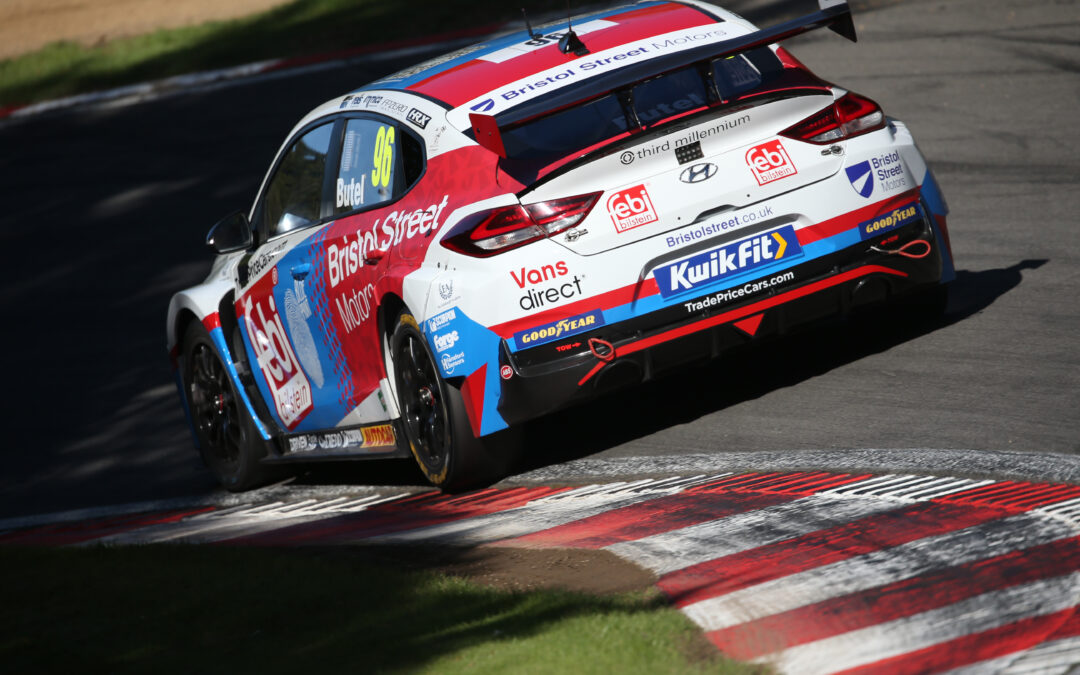 Jersey racer Jack Butel secured a pair of top 20 finishes at Brands Hatch as he brought the curtain down on his 2022 Kwik Fit British Touring Car Championship programme.

Jack made the trop to the famous Kent circuit hoping to maintain a solid run of form that had seen him take a Jack Sears Trophy class win at Thruxton, and then show strong top ten race pace at Silverstone in the previous two meetings.

Returning to the scene of his first ever BTCC points finish, Jack showed solid pace in free practice at the wheel of his EXCELR8 Motorsport-run Hyundai i30 Fastback N and then qualified 25th on the grid for race one.

Impressively, his lap time would be a full three seconds quicker than on his previous BTCC appearance at the circuit back in 2020 – with Jack having missed the corresponding event last year due to concussion suffered in an incident at Donington Park.

Emerging unscathed from the opening lap of race one having moved up three places, Jack made up a further spot in between two safety car periods and would eventually take the flag in 20th spot. A penalty for one of the drivers ahead then saw him promoted into P19.

Having maintained his position at the start of race two, Jack would find himself shuffled back down to 25th place during the early skirmishes, but managed to make up a place before the finish to grab 24th place.

Managing to avoid an incident on lap one of the season finale when the Honda of Dan Rowbottom was tipped into a spin ahead, Jack battled his way to the fringes of the top 20 – setting a new personal best race lap in the process.

Taking advantage of a clash between Michael Crees and Jade Edwards at the final corner, Jack would once again cross the line in 19th place to secure an eighth top 20 finish as his third season in Britain’s premier racing series drew to a close.

“I felt confident that we could be in the mix for points at Brands Hatch, but it was a weekend of ups and downs – which tells the story of my season,” he said. “We managed to fight for a solid result in race one but then I was out of luck in race two, which dropped me down the order when I’d hoped to be able to move forwards again.

“However, the season finished on a positive note with race three, and to come through to pick up another top 20 finish was a solid result to bring the curtain down on what has been a really challenging season.

“It was always going to be tricky with limited testing and the big rule changes that came in with the new hybrid, and I’ve also had more than my fair share of bad luck on track where things outside our control have hurt my chances. When you then add in having to deal with my dad and girlfriend both being ill during the season as well, it’s been really difficult.

“However, there are positives to take away from the season as I’ve shown strong pace at a number of circuits, and winning the Jack Sears Trophy at Thruxton for the second season in a row was also fantastic.

“I’ve got to thank the team for their efforts this season, and also all of the sponsors who have shown me fantastic support throughout the year as without them, I wouldn’t have been on the grid.

“Hopefully I can get a deal together for 2023 as the BTCC is where I want to be.”