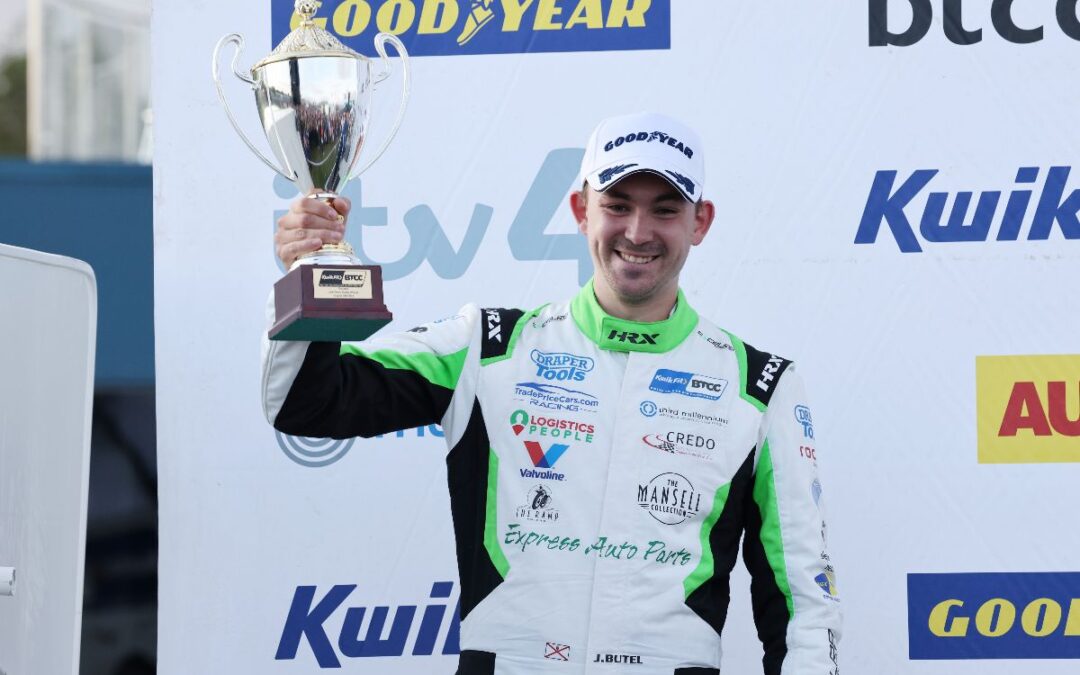 Jack Butel enjoyed another strong weekend on track as the Kwik Fit British Touring Car Championship returned to Thruxton, with the Jersey racer securing Jack Sears Trophy honours for the first time in his career.

Jack headed into the second meeting this year at the high-speed Hampshire circuit on the back of a breakthrough weekend at Knockhill, where he had matched his best BTCC result to date and scored his first points finish at the wheel of his EXCELR8 with TradePriceCars.com-run Hyundai i30 Fastback N.

With plenty of support trackside, Jack produced his best qualifying result of the year by far on Saturday afternoon to secure 22nd place on the grid for the opening race, with his fastest lap being less than a tenth of a second away from the top 20.

The improved result meant Jack was in a much stronger position heading into race day, and he took full advantage in the opening race as he moved up a place at the start and then battled ahead of Cupra duo Aron Taylor-Smith and Jack Goff to cross the line in 19th place.

Better was to come in race two however, with a strong run seeing him quickly move up into 16th spot behind the BMW of multiple race winner Tom Chilton.

Jack would heap pressure on the former World Touring Car Championship racer before fighting his way ahead on lap eight, and then eased away from his rival to secure 15th place and a second points finish of the campaign.

A maximum score amongst the Jack Sears Trophy entrants meant Jack headed into race three looking good to secure the weekend award for most points scored, and he would retain his place in the top 15 at the start.

Although Dan Rowbottom was able to get ahead in a truncated race featuring multiple safety cars, Jack crossed the line in 16th spot and although that meant he just missed out on another overall points finish, he wrapped up a first Jack Sears Trophy victory amongst those drivers yet to secure an overall podium.

Jack now sits third in the Jack Sears Trophy standings ahead of the seventh event of the season at Croft next month.

“I’m feeling pretty speechless with the weekend if I’m being honest,” he said. “Coming here, I knew that qualifying was going to be important and the fact that I got my best result was really key to how race day panned out.

“Making up those extra places compared to where I’ve been qualifying this season meant I went into race day feeling much more confident, and I knew we could fight forwards despite it being tricky to overtake round here when the field is so close.

“This is the kind of weekend that I have been hoping for for a long time, and I think that I have shown people what I can do. More importantly, I think this weekend makes me realise myself what I can achieve, and it’s been a huge confidence boost.

“Although I scored points last season at Brands Hatch, I know that was because things fell in my favour but for two weekends in a row now, I have been able to fight for championship points on merit and have really earned them. Of course it’s always nice to score points in a series like this, but it is much more rewarding when you have worked hard to get them, and that is what I’ve done with the team at both Knockhill and here.

“Winning the Jack Sears Trophy this weekend and getting my first silverware in the BTCC is absolutely brilliant and it makes all of this worthwhile. A huge thank you to the team for the work they have put in, and also a massive thank you to all of the sponsors and supporters who make this possible.”