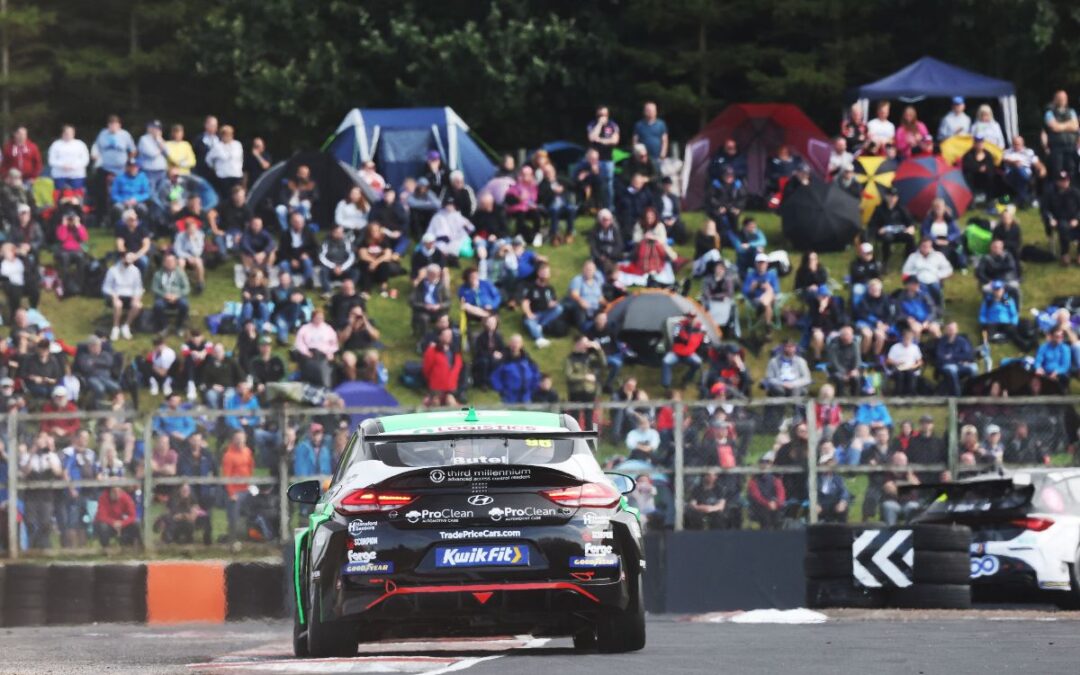 Jack went into the weekend on a high having scored points in the previous two meetings of the year at Knockhill and Thruxton, with the EXCELR8 with TradePriceCars.com driver also winning the Jack Sears Trophy – open to drivers without an overall BTCC podium – in the latter.

Making the long trip to North Yorkshire, Jack was optimistic about his chances of scoring points for the third successive meeting and was given an unexpected boost before track action even began after a revised result from race three at Thruxton saw him promoted up into 15th place – meaning a double points score from the weekend.

Having lapped little more than a second off the outright pace in free practice, Jack qualified in 25th place for the opening race of the weekend, leaving him with work to do on Sunday but with the 25-year-old well aware that his race pace had been stronger than in qualifying throughout the season.

Race day would prove to be a challenge however, with Jack waking on Sunday morning feeling decidedly under the weather.

Despite that, he kicked off race day with a solid run to 23rd place and had made up a spot on the opening lap of race two before the safety car was called to remove a car from the grass at the complex.

Unfortunately, as the field came round to take the restart, a car ahead suddenly hit the brakes which forced those behind to check up, with Jack unable to avoid running into the rear of the Honda of Jade Edwards before he was then hit from behind by the Cupra of Nicolas Hamilton.

The contact dislodged the bonnet on the Hyundai i30 Fastback N which resulted in Jack being forced to make an unscheduled pitstop and left him a lap down in 26th place.

The start of race three would prove to be chaotic after a multi-car clash at the opening corner, but Jack picked his way through the carnage ahead to run in 23rd place. Staying out of trouble once again, Jack worked his way up into the top 20 and would cross the line in 19th spot.

Jack ends the weekend sitting fourth in the Jack Sears Trophy and now heads straight to Silverstone for round eight this coming weekend.

“It was a nice surprise to get the news on Saturday morning that we’d been promoted into the points in the final race at Thruxton, but unfortunately that turned out to be the high point of the weekend,” he said.

“Croft is a bit of a bogey circuit for me, and although I was hoping we could challenge for points and keep the run going, I knew it was going to be difficult because the circuit just doesn’t seem to agree with me for some reason.

“I wasn’t helped by the fact that I woke up on Sunday morning and really didn’t feel too great, but I pushed on to try and get the most that we could from the three races. All things considered, I’m happy with how I performed and I got the car home in one piece – apart from in race two!

“That was a bit of a funny situation as we came round for the restart and someone slammed on the brakes and that just concertinaed backwards. I ended up going into the back of Jade and then poor Nic went into the back of me and he came off worst of all. It was really unfortunate but just one of those things that can happen, and at least we came back from it to end up with a top 20 in race three.

“I think this weekend has shown again that I need to do more work with the team on qualifying as we had decent race pace but when it’s so competitive – and at a circuit like this where it isn’t easy to overtake – you can pay the price for a bad result on Saturday. We’ll work on that in the three rounds still to come.”